We have found that many students have different conceptions about safety in the off-campus community. In response, our office has decided to launch monthly safety reports - with some help from the local police and community partners. Each month’s safety report is split into three different sections:

The goal of this project is to carefully & responsibly spread awareness about crime to the local community. Remember, however, that our office is not a law enforcement agency or a news agency - as such, we may not be able to be as specific or detailed as those organizations can be.

The safety report will be available below as well as in our newsletter. We cover the following neighborhoods:

Thank you for staying informed! 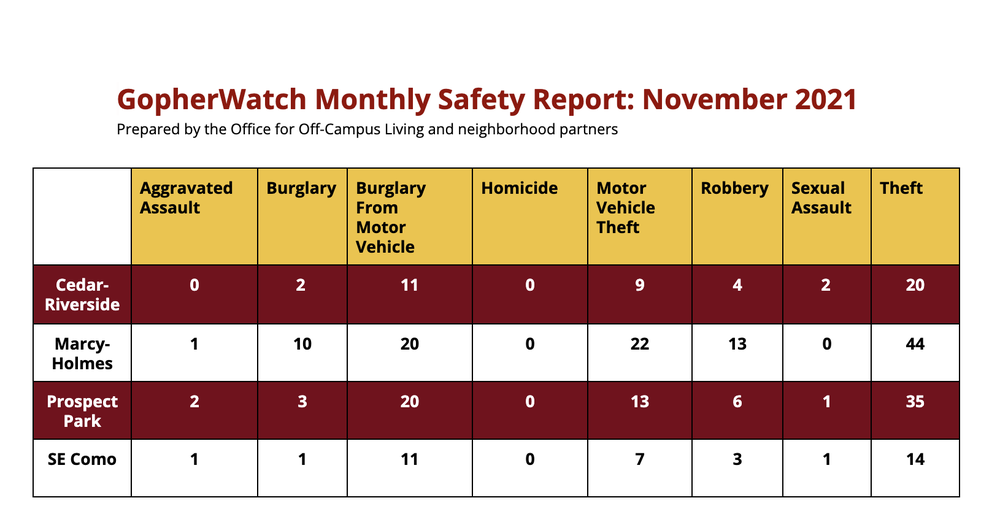 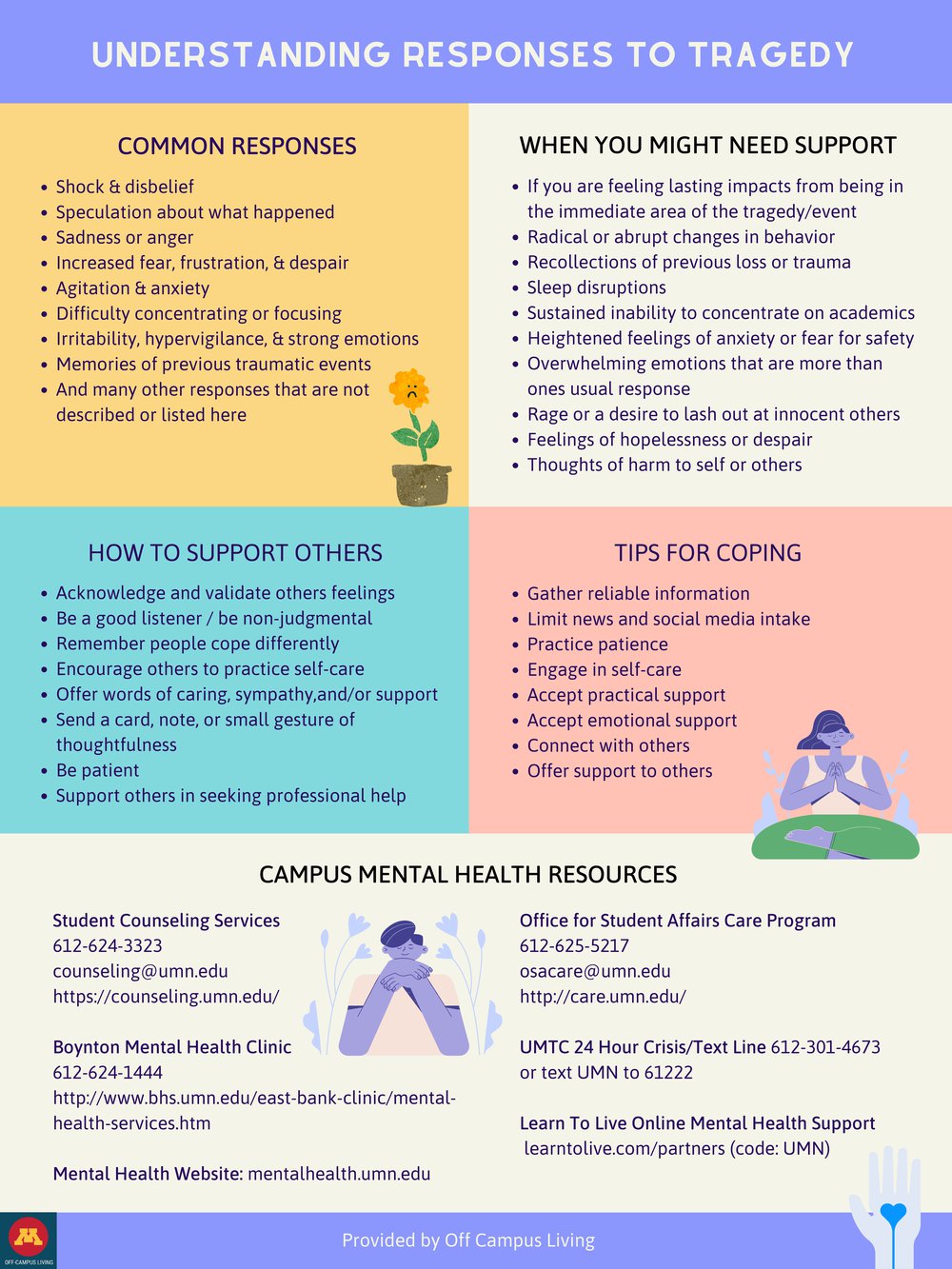 Aggravated Assault: An attack or attempted attack with a weapon, regardless of whether an injury occurred, and an attack without a weapon when serious injury results.

Burglary: Unlawful or forcible entry or attempted entry of a residence. This crime usually, but not always, involves theft. The illegal entry may be by force (e.g., breaking a window or slashing a screen) or may be without force (e.g., entering through an unlocked door or an open window). As long as the person entering has no legal right to be present in the structure, a burglary has occurred. Furthermore, the structure need not be the house itself for a burglary to take place; illegal entry of a garage, shed, or any other structure on the premises also constitutes household burglary.

Burglary from a Motor Vehicle: The unlawful entry into an automobile, truck, motorcycle, or any other motorized vehicle legally allowed on public roads and highways to commit or attempt to commit a felony or theft.

Theft of a Motor Vehicle: Stealing or unauthorized taking of a motor vehicle, including attempted thefts. Including all cases where automobiles are taken by persons not having lawful access even though the vehicles are later abandoned— including joyriding.

Sexual Assault: A wide range of victimizations, separate from rape or attempted rape. These crimes include attacks or attempted attacks generally involving actual or attempted sexual contact without affirmative consent between victim and offender. Sexual assaults may or may not involve force and include such things as grabbing or fondling. Sexual assault also includes verbal threats, regardless if the threat is carried out.

Theft: Completed or attempted theft of property or cash without personal contact. Incidents involving theft of property from within the sample household are classified as theft if the offender has a legal right to be in the house (e.g., a maid, delivery person, or guest). If the offender has no legal right to be in the house, the incident is classified as a burglary.

All crime definitions were taken directly from the Bureau of Justice Statistics, the United States' primary source for criminal justice statistics website and modified slightly for clarity.

How We Collect Crime Data

With a proper understanding of the definitions we are using for crimes, here are some tips on interpreting the data:

If you have any other…

General Safety Tips and How to Report Crimes

- Hide Your Valuables
Keep your laptop, purse, wallet, briefcase, etc. attended or out of sight.
- Walk ‘Cheaply’
Carry the minimum amount of valuables
- Activate Your Phone
Be sure your phone's location services is activated, so police can attempt to recover it if stolen.
- Walk Aware
If walking alone, avoid distractions—phones, ear buds, etc.
- Walk Safe
Walk in groups and choose well lit routes.
- Lock the Door
Lock your living and work areas every time you leave and when you are home too.
- Keep Doors Closed
Do not prop open entrances to buildings.
- See the Blue
Note the campus’s 21 blue emergency phones, which connect you with the UMPD at the touch of a button.
- Enter Alone
Don’t let strangers ‘tailgate’ behind you into your building.
- Write It Down
Write down your bike’s serial number for matching in case of theft.
- Keep Your Bike Lit
Park your bike in a well-traveled, well-lit area.

(all safety tips provided are SAFE U safety tips. For more click here)

Reporting Crime-Who Should I call?

If you are in the vicinity of an emergency, do not hesitate to call 9-1-1.
This the most important thing to know. If someone's safety is in danger or you think it is, call 911. When in doubt, call 911. Be ready to provide your current location and a suspect description if necessary.

But if you are in a non emergency situation, you can contact:

Other great safety resources can be…

When traveling or vacationing away from home:

Archive of Safety Reports and other Resources 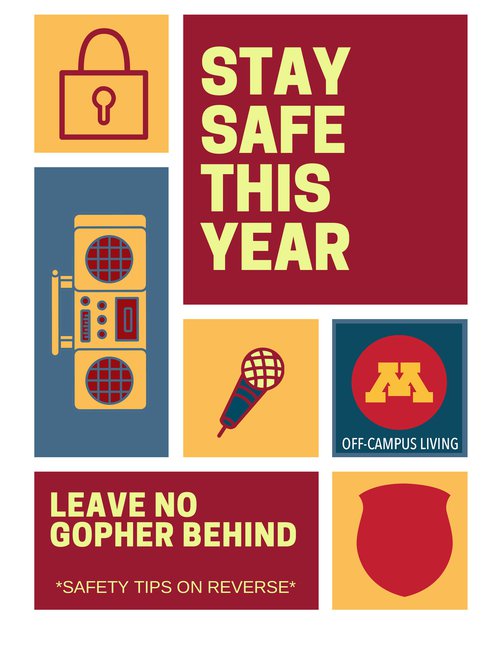 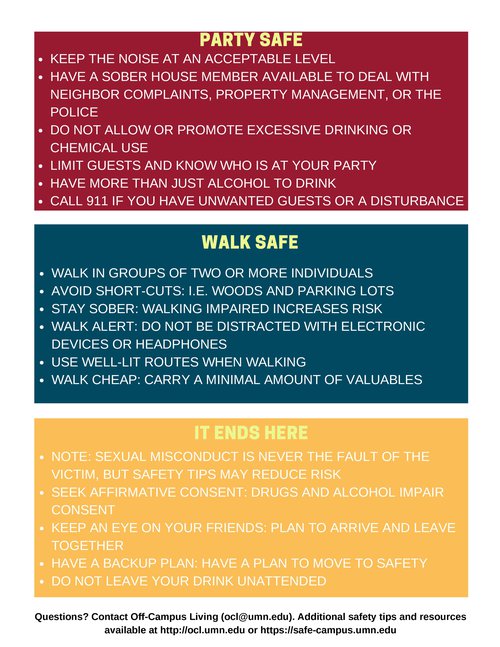